A directory is basically a folder where web designer’s store their website files (with respect to server). By “directory traversal attack,” I simply mean that the hacker is able to navigate between the directories and the files stored in those directories – like the root, which contains all confi files, htaccess files, ini files, and xquery files. These files are sensible for any website, if their security is not handled properly then a hacker will easily dominate the site.

At this point, we have a complete understanding of what “directory” and “dot dot slash” mean. Now let’s clearly understand what directory traversal attack means.

Directory Traversal attacks is an HTTP exploit or vulnerability which allows attackers or hackers to access restricted directories (most hackers are interested in root directory access) and execute commands outside of the web server’s root directory. The goal of this attack is to access sensitive files placed on a web server by stepping inside the root directory using the dot dot slash technique. By exploiting a directory traversal vulnerability, an attacker can access files in directories other than the root directory. This can be harmful, since access to restricted files containing passwords or other private information may compromise the web server.

For example, by typing the following URL:

The attacker or hacker causes sample.php to retrieve the file “../../../../web-config.php” and display it in the attacker’s or hacker’s web browser. As mentioned above, the character sequence “../” stands for “one directory up.” So the string “../../../../web-config.php” therefore means “go four directories up, then down into the root directory and retrieve the file ‘web-config.php’ from there.”
The attacker needs to guess how many directories to climb in order to get to the desired directory, but this can be done easily via trial and error.

I have set up a live example on my system to explain this vulnerability to users using a tomcat server.
Say I am browsing this page:

Here is the result of the above step. We are able to access product.jsp in the root folder because this sample was vulnerable to a directory traversal attack. 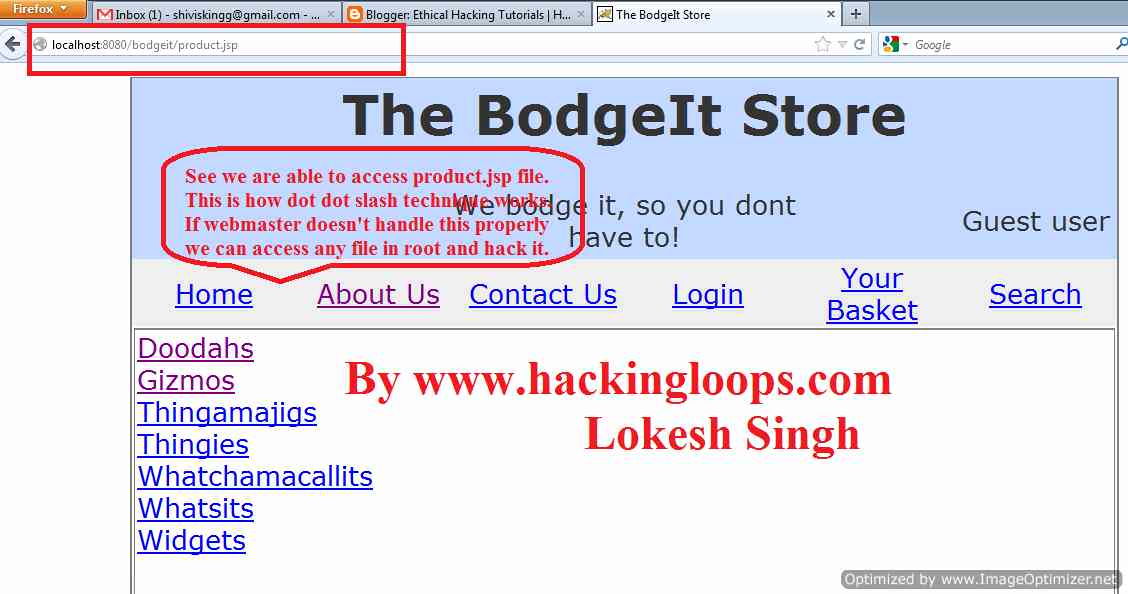 Some web applications scan query strings for dangerous characters such as:

Additionally, in windows Internet Explorer, Microsoft added Unicode characters support, which introduced a new way of encoding “../”, causing their attempts at directory traversal prevention to be bypassed.
Multiple percent encoding, such as

are translated into / or characters.
As a good ethical hacker, we must know how to protect these loopholes while designing or securing a new or existing website. So I will also explain the measures for protecting our website from directory traversal attacks in my next article.