Covering Tracks over Network – Most important step of a Hack attack. Most Hackers know how to hack into networks as lots of tutorials are available over the internet regarding how to do information gathering, scanning or networks and vulnerability database. But you will hardly find anything like covering your tracks over network.. that means most people know how to get into system but don’t know how to remove their tracks, so that they remain undetected. And if you are detectable then you are finished. You will be until and unless you don’t remove your tracks. So friends, lets learn how to cover your tracks over Network to remain undetectable in Hacker’s Guide. 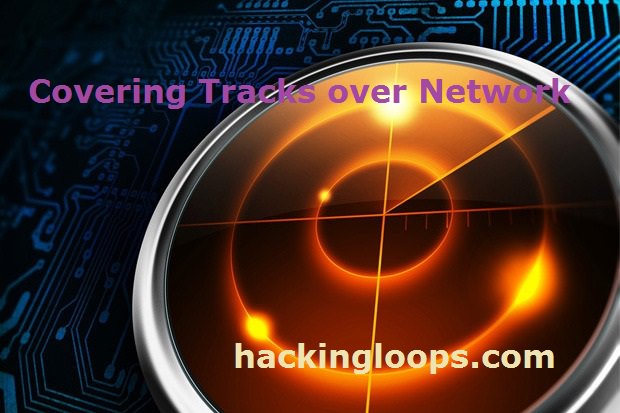 How to cover tracks over Network :

In this type of attack, the attacker installs a reverse HTTP shell on the victim computer. This reverse HTTP shell is coded is such a way that it ask the commands from an external moderator who controls this reverse shell at regular intervals. So it looks like a normal traffic to an organization network perimeter security device like a firewall, as port 80 is usually opened.

Once the attacker receives the request from the reverse HTTP shell, commands will be issued back that will be executed locally by the victim. This all is seen as HTTP request /response to the network devices. Once the commands get executed, results will be sent out in the next web request. These HTTP reverse shells can also be programmed to bypass any static authentication required by perimeter devices, like a firewall.

Because HTTP reverse shells are so famous, some organizations keep a check on what is leaving their network in response to the client’s GET request. Some also check what comes as a reply to a GET request and most probably the attacker commands can be detected there. In lieu of this, some carry traffic via covert channels using ICMP packets. This is usually successful because organizations block only incoming ICMP packets and forgot about outgoing ICMP packets. Because of this configuration, an attacker uses ICMP packets to transfer TCP payloads.

First the attacker configures the local client to connect with the victim client. The victim in turn encapsulates the TCP payload in an ICMP ECHO packet and forwards it to the proxy server. The proxy server in turn de-encapsulates the packet and extracts the TCP payload and send to attacker. To the network devices, it seems like a simple ICMP packet.

Various tools are available to do this. Some of them are given below:

Some of the interesting fields in TCP packet that can be used to transfer the content are: