Welcome back my fellow hackers! There have been some articles I’ve been wanting to write regarding social engineering, more specifically, stealing passwords. But, in order to do that, there are some basic concepts and methods we needs to have a grasp of. The first of these concepts is Man in the Middle Attacks. Since we’ve already covered that, we’re going to cover the next concept, DNS spoofing. First, we’ll cover what DNS is exactly, then we’ll quickly discuss the anatomy of the DNS spoofing attack, and finally, we’ll perform the attack! So, let’s get started!

This question is actually fairly simple. DNS stands for Domain Name System. You know when you go to a website using a browser, you type in a URL instead of the IP address of the server? That’s DNS working it’s magic! What DNS does is it keeps track of what IP addresses reside at what URLs, that way we don’t have to remember the addresses, just the URLs! Pretty neat, huh? Like I said, DNS is fairly simple, so let’s move on to the next part, the anatomy of a DNS spoofing attack.

Anatomy of a DNS Spoofing Attack

Since this can be a bit difficult to talk about without a reference, we’re going to be dissecting this attack based on this diagram: 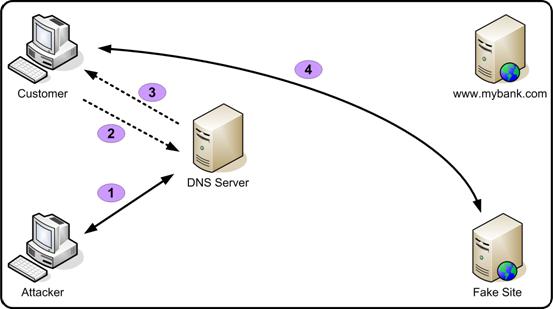 As we can see here, the attacker starts by pretending to be the DNS server. Then, when the victim requests the address for the desired site, the fake server responds with whatever address the attacker wants, which in this case, directs the victim to a fake site. This attack is very simple, but can often play a part in a larger attack. Now that we know the ins and outs of DNS spoofing, let’s perform it ourselves!

Setting up the Attack

Let’s start by setting up the website. First, we’ll whip up some basic HTML code so we actually have a site. We’ll be using gedit. The proper file can be opened with the following command:

Now that we have our file open, just go ahead and erase everything in it. I’ll be replacing it with the following:

Feel free to replace the words with whatever you like, as long as you follow the HTML tags, everything should be fine.

Now that we have our website’s HTML code ready, we can go ahead and start the server that will serve the website. We’ll just be using the pre-installed Apache2 webserver, which can be started with the following command:

Now that we have the site up and running, we need to quickly edit the configuration file for the DNS spoofing tool. We’re just going to be modifying the /etc/hosts file and using it for our attack. We can open the file with the same command we used previously, but with the new file path. Once we have the file open, we can set up the file to tell the spoofing tool what sites we want to spoof. Before we do that, we need to know our local IP address, which we can find with the ifconfig command:

The line we added (the bottom one), will tell the spoofing tool that we want www.hackingloops.com to be redirected to our local IP address, which will then serve them our website instead of the real one! That’s it for the setting up, now it’s time to execute the attack!

Now, if we’re going to be redirecting traffic that isn’t ours, we need to be able to read it. This is where the Man in the Middle Attack comes into play. We’re going to place ourselves between the victim and the gateway, so that all of the victim’s DNS requests have to go through us. We can then sniff these requests and redirect them with our spoofed responses! To start, we need to know the gateway’s IP address, which we can find with the route command with the -n flag:

We can see by the above output that the address of the gateway is 10.0.0.1. For the sake of keeping this relatively short, we already have our victim’s address, which is 10.0.0.13. Note that all these addresses are on the same network. This form of DNS spoofing only works if the victim is on your LAN. Now that we have the addresses, we can start the Man in the Middle attack (finally)! We’re going to be using arpspoof for this attack, and we’ll be using the -i, -t, and -r flags to specify the interface to attack on and the addresses to attack:

Once we execute this, the MitM will start.

DO NOT FORGET: You must enable IP forwarding, so the data from the victim doesn’t get hung up on the attacking system. This can be done with this command: echo 1 > /proc/sys/net/ipv4/ip_forward

Now that we have our MitM running, we should have all the victim’s traffic flowing through the attacker system. Since we can see all this traffic, we can start the DNS spoofing tool (dnsspoof) to listen for DNS requests for www.hackingloops.com and respond to them with our IP address! Let’s go ahead and start dnsspoof now. We use the -i flag for giving an interface, and the -f flag for giving the path to the hosts file. The command to start the attack should look something like this:

We can see that dnsspoof is now listening for UDP traffic on port 53 (port 53 is the DNS port, and UDP is the transport protocol DNS uses) from all address but our own! Now that our attack is up and running, let’s move over to our victim PC and try and access www.hackingloops.com from a web browser:

Now, before we celebrate, let’s look back at dnsspoof to see the output:

There we have it! We were able to start a Man in the Middle attack, and use it to perform a DNS spoofing attack, which redirected a legitimate request for www.hackingloops.com to our fake website!

There are multiple reasons for this article. For one, we’ll be needing these attacks very soon in order to steal passwords from an unsuspecting user. Secondly, it’s a proof of concept of sorts. It shows that these smaller attacks (MitM, DNS spoofing, etc.) aren’t just one trick ponies. We can combine these attacks to achieve even greater things. Many times, when performing an actual hack, you will need to combine many different kinds of attacks at once to achieve a goal, this just proves that. I’ll see you next time!