In our previous tutorials we have learned about two types of cross site scripting i.e. Reflected Cross Site Scripting and Stored Cross Site Scripting. Most of our readers must be interested in do we have some XSS attack which is mixture of both. Yes, we have DOM based XSS. DOM Based XSS is an mixture of Reflected XSS and Stored XSS. In a DOM-based XSS attack, the malicious script is not actually parsed by the victim’s browser until the website’s legitimate JavaScript is executed. But before that we must understand what is DOM?

Wikipedia states that “The Document Object Model (DOM) is basically a cross-platform and language-independent convention for representing and interacting with objects in HTML, XHTML, and XML documents. The nodes of every document are organized in a tree structure, called the DOM tree. Objects in the DOM tree may be addressed and manipulated by using methods on the objects. The public interface of a DOM is specified in its application programming interface (API). ”

To render a document such as an HTML page, most web browsers use an internal model similar to the DOM. The nodes of every document are organized in a tree structure, called the DOM tree, with topmost node named “Document object”. When an HTML page is rendered in browsers, the browser downloads the HTML into local memory and automatically parses it to display the page on screen. The DOM is also the way JavaScript transmits the state of the browser in HTML pages.

DOM Based XSS is an XSS attack wherein the attack payload is executed as a result of modifying the DOM “environment” in the victim’s browser used by the original client side script, so that the client side code runs in an “unexpected” manner. That is, the page itself (the HTTP response that is) does not change, but the client side code contained in the page executes differently due to the malicious modifications that have occurred in the DOM environment. 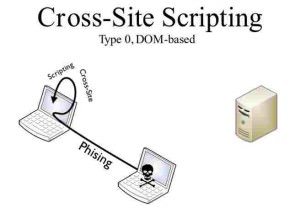 In DOM-based XSS attack, there is no malicious script inserted as part of the page; the only script that is automatically executed during page load is a legitimate part of the page. The problem is that this legitimate script directly makes use of user input in order to add HTML to the page. Because the malicious string is inserted into the page using innerHTML, it is parsed as HTML, causing the malicious script to be executed.

Lets understand DOM based XSS attack with help of an example:

Suppose a developer made a website and he want’s to provide content in multiple languages i.e. he wants that his users can select language of their choice. But as per requirement, website mush have some default language too. This functionality can be invoked using below URL:

DOM based XSS can be achieved if hacker is able to insert his/her code in default tag and attack string will look something like below:

When the victim clicks on this link, the browser sends a request for:

to www.abcdefg.com. The server responds with the page containing the above Javascript code. The browser creates a DOM object for the page, in which the document.location object contains the string:

The original Javascript code in the page does not expect the default parameter to contain HTML markup, and as such it simply echoes it into the page (DOM) at runtime. The browser then renders the resulting page and executes the attacker’s script:

Note that the HTTP response sent from the server does not contain the attacker’s payload. This payload manifests itself at the client-side script at runtime, when a flawed script accesses the DOM variable document.location and assumes it is not malicious.

Note : In the example above, while the payload was not embedded by the server in the HTTP response, it still arrived at the server as part of an HTTP request, and thus the attack could be detected at the server side.

That’s all for today! Enjoy guys and have happy learning.