Have you ever considered stealing bandwidth from a local lan? When I am surfing the net at night and need more speed for downloading games and

movies, this is the option that I usually take. I’m going to show you how, using ARP Poisoning. ARP Poisoning is the technical name for network sniffing. Basically, sniffing is used to get passwords – both encrypted or unencrypted – on a network. But it can also be used to choke the network bandwidth to get maximum bandwidth in a single system. To start, let me give you some insight on how this happens.

Below is an example of a normal network. We can see from the diagram that we are working on a laptop and we have to sniff out a target computer. All the systems are getting data via a switch which is itself connected to a router. The router has a MAC address which, in this case, is not binded to a particular IP. All the data is routed to a switch which is catered to systems. 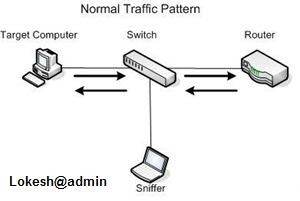 The systems connect to a router through its MAC address. Technically, we have to spoof the router’s MAC address to ensure the data is sent through our system (in this case, the laptop) and we are able to see and analyze each packet of data. In normal conditions, the data sent through LAN is unencrypted. Simply put, this process of spoofing is known as ARP poisoning. 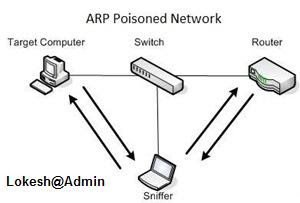 As pictured in the above diagram, we have now spoofed the MAC address and can view the passwords as data has passed into our system.

After you poison a network and spoof the address, before you have started sniffing, all the systems look for data to your system and will not be able to access the internet. Suddenly you will find yourself playing with full bandwidth! 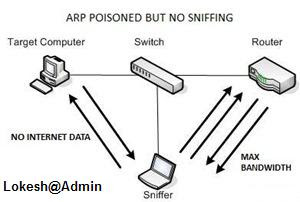 To accomplish this, download Ettercap and poison the network but DON’T START SNIFFING. Once you have poisoned it, you will be able to surf the internet at maximum bandwidth whereas others won’t. I used to do this at night so nobody was awake to complain, and stopped immediately after my downloads finished.

Ettercap is one of the best available resources for sniffing a network.

If you want to check and see if your network is sniffed, go to –

The type without quotes “ARP –a”

If you network is being sniffed,then all the MAC addresses will be the same.