Welcome Back Guys, After a heavy Busy Schedule I come with the Next Hacking Tutorial. I think everybody who is using computer has faced the problem of viruses at least once in life. In today’s Class I will going to Introduce What are Trojans,Viruses, Backdoors,worms etc. And How they work to infect the system. In later classes we will discuss more about them Like How to Get rid of Viruses, Trojans etc. How to remove them and the Most Important How to Use them for Hacking Victims systems etc..So Guys Keep Reading..


Lets Start With Viruses… What are These and How they Work..

Virus is a self-replicating program that produces its own code by attaching copies of itself into other executable codes like executive files(.exe) ,Dynamic link Library’s(.dlls) etc..
Virus Generally operates in the background and offcourse without the Desire of the User as Noone want that virus to harm their computer..ROFL :P


Some Well known Characteristics of Viruses:

WORKING OF VIRUSES:
Generally most of the Viruses Works in two Phases:
1. Infection Phase
2. Attack Phase
From the name you can have the Idea what are these Phases .
• Infection Phase:
– Virus developers decide when to infect host system’s programs
– Some infect each time they are run and executed completely.  Ex: Direct Viruses
– Some virus codes infect only when users trigger them which include a day, time, or a particular event
Ex: TSR viruses which get loaded into memory and infect at later stages
• Attack Phase:
– Some viruses have trigger events to activate and corrupt systems
– Some viruses have bugs which replicate and perform activities like file deletion, increasing session time
– They corrupt the targets only after spreading completely as intended by their developers
It will be much more Clear From the Snapshot that How the Virus Works: 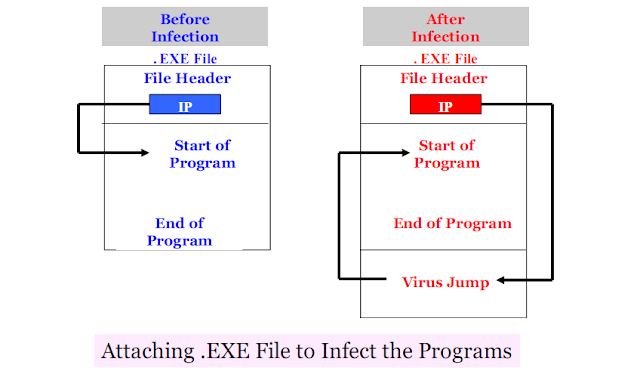 Fig: Infection Phase that How file is attached to .exe files to infect Programs. 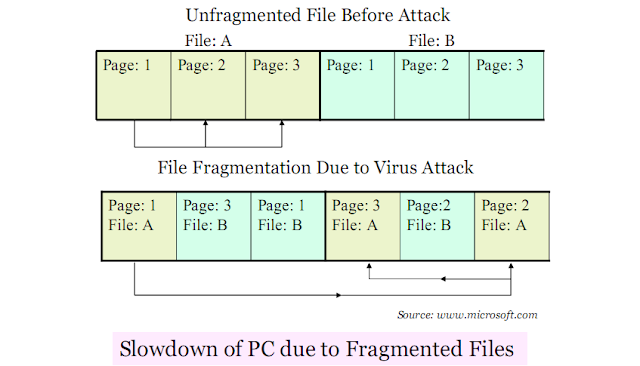 Fig: Attack Phase that How the Files are got Fragmented and system speed Slows Down
Why People Create Viruses ??
I think Everybody thinking of that why people creates Viruses and which people Creates them.. hahahaha Real Question that comes to my Mind when I was Newbie in this field..
Some of he Most Common Reasons are Discussed Below:
• Research projects (People Doing Research Work Detect the Flaws in particular system and creates Code for that)
• Pranks(Just for fun like us people who just creates viruses for irritating frens)
• Vandalism
• To attack the products of specific companies (like Microsoft Products Xp,Vista,Windows 7 etc.)
• To distribute political messages
• Financial gain(Stealing Money from accounts etc..)
• Identity theft
• Spyware (to Monitor the Working of Remote Computers)
So Guys thats all for Today we will discuss more about them in Next classes i.e Tomorrow so wait Till then..
In tomorrow’s class we will discuss How to detect viruses attacks and how to get rid of them…
Enjoy and Have Fun!
Previous Post
64 Tips to Make Windows 7 Faster, Secure, Easy to Use
Next Post
Hacking Class 16 – Introduction to Viruses, Backdoors, Trojans (continued)