Welcome back my fellow hackers! Today we’re going to be deviating from our antivirus evading escapades to discuss a tool that I’ve recently started using, Mimikatz. Mimikatz is a tool to automate many Windows hacking tactics. The capabilities of mimikatz stretch much further than a single article, so today we’re going to be focusing on a basic function of mimikatz, stealing Windows credentials straight from memory. Lucky for us, Rapid7 has included mimikatz into Metasploit, which makes it very easy to use.

In our exercise today, we’re going to be compromising a Windows 7 VM and using Mimikatz within Metasploit to steal the password of the user that’s logged into our VM. So, let’s get started!

First things first, we need to generate a payload to execute on our victim machine. For this we’ll be using msfvenom to generate a meterpreter payload in the form of an EXE file. Once we’ve generated our payload, we can move it to /var/www/html on our Kali VM and use the command service apache2 start in order to start a web server to serve our payload to the victim (note: I’ll be generating the payload within the aforementioned directory):

Now that we’ve got our payload, we can move on to setting up our handler. The handler will catch the connection made by the payload on the victim machine. Once we catch the connection, we should be yielded a meterpreter. In order to set up the handler, we use multi/handler from within the msfconsole:

Now that we have our web server up and ready to serve our payload, and our handler listening for the reverse connection, we can move on to downloading and executing our payload on the victim machine:

Note: I’m using Internet Explorer for this act, as using a more modern browser (such as Google Chrome) will flag our payload as malware and refuse to download it. This is due to the fact our payload is an un-obfuscated EXE file of a well-known payload.

Once our payload is finished download, we need to right-click it and hit “Run as Administrator.” This step isn’t 100% necessary, but if we don’t then we’ll have to jump through the hoops of privilege escalation (which is beyond the scope of this article). Now that we’ve downloaded and executed our payload, we can return to our Kali machine and we should see that we have a brand new meterpreter, with which we can load mimikatz and steal that password!

So, we’ve got our meterpreter. But there’s a slight problem, mimikatz needs SYSTEM privileges in order to perform. But don’t fret! Since we ran our payload as Administrator, we should be able to use the getsystem meterpreter command to elevate our privileges to that of SYSTEM:

There we go! Now that we have SYSTEM privileges, we can load the mimikatz extension for our meterpreter: 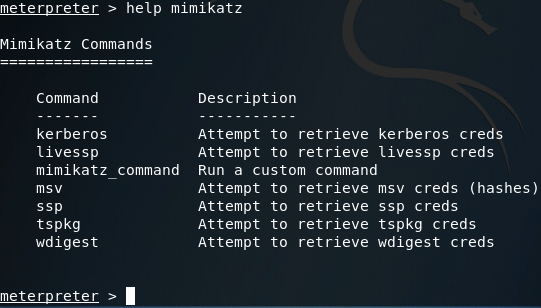 Here we can see that we have many options when using mimikatz. Most of the options presented in the help page are various tactics for pulling passwords out of memory (Note: the mimikatz_command option can be used to access other capabilities of mimikatz, which I plan on getting to in a later article).

After some trial and error regarding which tactic to use, I discovered that in this particular case, the wdigest method will successfully retrieve the Windows credentials we’re after:

There we have it. We can see at the bottom of the above screenshot that the credentials mimikatz pulled are; Username: Defalt, Password: C0mplexP@ssw0rd!!@, which are the credentials I set before we began this exercise.

This is just the tip of the iceberg as far as mimikatz capabilities, but we’ll get to the rest in due time. Until then, happy hacking!