PowerShell is to Windows, what a terminal is to Linux. It’s a powerful automation and scripting tool that comes pre-installed with all new Windows releases. In addition to running commands, PowerShell also accepts and returns .NET framework objects. This opens the door to a whole new world of tools and solutions to manage and configure Windows.

An Intro to Cmdlets

Command-lets (cmdlets) are lightweight, single-purpose commands used to interface with PowerShell. Written in a .NET programming language, they are compiled and stored as a .dll file. Usually they execute a single operation like copying files, moving directories, or displaying help. Cmdlets can be executed directly from the shell, or from a PowerShell script. An example of a cmdlet is: get-help, which is used to fetch information about other cmdlets. Cmdlets can accept input parameters as well; e.g. get-help add-appxpackage will return helpful information about the appxpackage cmdlet.

A PowerShell function is an element that groups code and has optional input and output parameters. Unlike a cmdlet, they aren’t compiled. They can be executed directly from the command line, or specified in a script or a module. An example of a function is Get- Start-PSAdmin which starts PowerShell as an administrator.

How to Launch PowerShell

As mentioned above, PowerShell comes installed by default in all new Windows versions. To launch it, follow these steps: 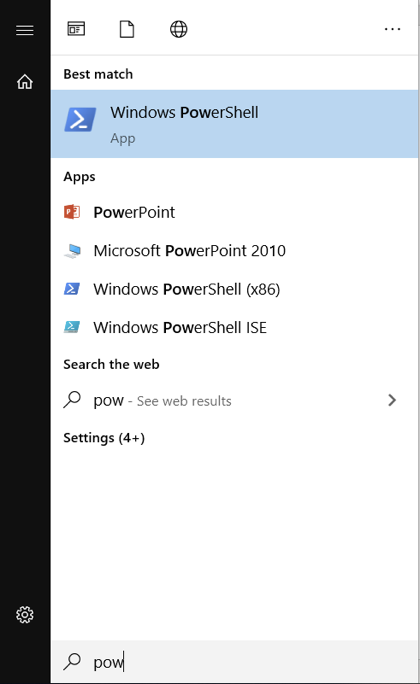 Now let’s look at some of the most basic command-lets that you should know about:

The copy-item command-let (alias: copy) allows users to copy an item from one place to another. The syntax of the command is as follows:

By default, Microsoft releases PowerShell with scripting disabled. This is to prevent hackers from running scripts in the background without your knowledge. However, if you want to turn on scripting, you can set either one of the four available security levels:

If you are interested in reading any application logs, you can use the “Get-eventLog” cmdlet. The syntax would be as follows:

To know what services are currently running on the system, you can use the “Get-service” cmdlet.

You can also ask PowerShell to tell you whether a service is installed on your system. To do so, append the -Name directive before the name of the service.

The above will clear all commands that have the words “get” and “app” in them.

Just like the “ForEach” function of container datatypes in programming languages, the “ForEach-Object” cmdlet in PowerShell allows you to execute an operation on every item in a list. So, let’s say you want to print out the names of different running processes in red. You can do that using the following command:

Sometimes, after running a bunch of commands on the terminal, you just want to clear the screen. You can do that using the “clear” cmdlet.

If you are a developer working with PowerShell, the “compare-object” command-let is one you certainly want to master. As the name indicates, it allows you to compare two objects directly. Most of the time you will use it in a script, but you can also use it directly via the CLI as follows: 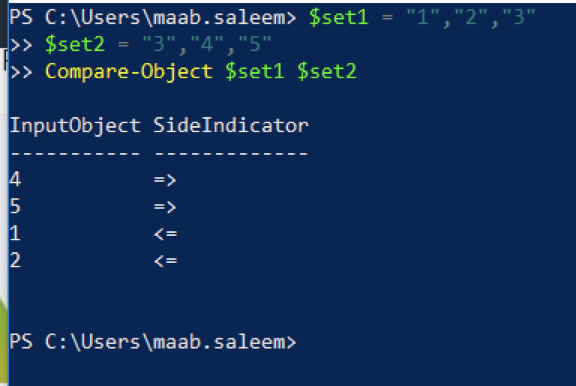 You can also create a .NET or a Component Object Model (COM) object on PowerShell. The “New-Object” cmdlet creates objects that can be manipulated just like normal .NET objects.

These were only some of the highly used PowerShell commands you should know about. There are plenty more to explore. Find them here.

Replace “alex.pc” with your username.

You can group different commands in your script to create a comprehensive administration/automation tool. If you want to run a script periodically, you can do so using the ScheduledTasks group of cmdlets. More information on them can be found here.

PowerShell is a powerful scripting and automation tool that makes Windows systems easy to administer and monitor. Whether you want to run background jobs, or just want to move a bunch of directories around, you can do it all using PowerShell.

Previous Post
Cybersecurity Challenges and Solutions for Internet of Things
Next Post
Which Data Loss Prevention (DLP) Solution is best?