Any Penetration Testing project is heavily dependent on its first phase i.e. INFORMATION Gathering . Even during the war driving phase we need to discover the Addresses of the live hosts . In a case where your penetration testing requires you to scan for the wireless network addresses without connected to the network , Netdiscover is of assistance .

Netdiscover is used for the active or passive scanning of those wireless networks without the DHCP server , specially when you are wardriving . However the tool can also be used for scanning hub/switched networks . This tool helps in the quick discovery of the IP addresses on a given network , even if we dont have any DHCP server .

In Kali Linux , the Tool is under the following path : 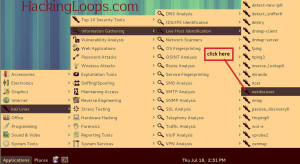 OR just simply type netdiscover on the terminal to start the tool in the Default mode .

To view the Help menu Type  :  netdiscover -h and you will get a list of commandline options . 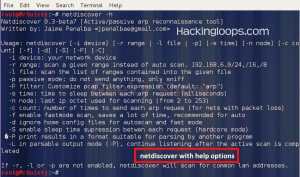 If you simply type netdicover on the terminal then the Auto Scan is started .

In case you want Netdiscover only to scan for a range of IP addresses use the following syntax :

Netdiscover comes as a network scanner checking for live hosts but what gives it power is to scan a network even when we dont have a DHCP server to access . In such a case where we need a quick network scan , Netdiscover is the best tool to use .

This is a tutorial for penetration testing the Windows 7 machine for the remote desktop connection vulnerability using everyone’s favorite exploitation, Framework. Earlier there were exploits for the unpatched XP Machines, but those don’t exist in modern Operating Systems such as Windows 7.

Generally, we have seen client side exploits and payloads all the time for Windows 7. Social Engineering Toolkit is great for these attacks; however, Windows 7 still has a vulnerability living in it, in the RDP (Remote Desktop Protocol) Port 3389 which is accessible over the LAN and the internet. Over the internet, this gets a little complicated due to the need for port forwarding, but over the LAN this attack is as easy as pie.

All you need to perform this penetration testing tutorial is a Kali machine and a Victim Windows 7 Machine.

Let’s begin the tutorial with a scenario where the victim’s Windows 7 machine is over LAN. All we need to get started is the IP address of the Windows 7 machines, which you can easily get either by NMAP or IPCONFIG command.

Next we need to select the exploit that we are planing to use i.e ms12_020_maxchannelids

And you are finished!

List of Penetration testing Applications for the Android OS

Port Scanner: This Application allows the penetration tester to scan ports on a remote host via its IP or domain name (in case of a website) so you can know which ports are open on the host. The Application supports 3G network , protocol recognition among other features .

Fing: Fing is a professional App for network analysis. A simple and intuitive interface helps you evaluate security levels, detect intruders and resolve network issues. It helps you to find out which devices are connected to your Wi-Fi network, in just a few seconds.

tPacketCapture: tPacketCapture does packet capturing without using any root permissions. tPacketCapture uses VpnService provided by Android OS. Captured data are saved as a PCAP file format in the external storage.

Droidsheep: Droidsheep Android application is written by Andrew Koch. It works as a session hijacker for non-encrypted sites and allows you to save cookies files/sessions for later analysis. It is no longer available from the developer’s site i.e. droidsheep.de , however you can still find it on freeweb hosting sites uploaded in the groups . Download and Install at your own risk .

FaceNiff: FaceNiff is an app that allows you to sniff and intercept web session profiles over the WiFi that your mobile is connected to. It is possible to hijack sessions only when WiFi is not using EAP, but it should work over any private network.

These applications gives the Penetration Tester the liberty to do major network security analysis with just the Android phone .

Nessus: Nessus the most popular penetration testing tool that is used to perform vulnerability scans with its client/server architecture. Nessus Android app can perform following tasks.

Shark for Root: Traffic sniffer, works on 3G and WiFi (works on FroYo tethered mode too). To open dump, use WireShark or similar software, to preview dump on phone, use Shark Reader.

PacketShark: This is a packet sniffer application. Features include friendly capture options interface, filter support, live capture view, and Dropbox upload of captured files. It allows viewing of the captured packets — no need to install other application as a viewer.

DroidSQLi: DroidSQLi is the first automated MySQL Injection tool for Android. It allows you to test your MySQL-based web application against SQL injection attacks.

It automatically selects the best technique to use and employs some simple filter evasion methods.

Sqlmapchik: sqlmapchik is a cross-platform sqlmap GUI for the popular sqlmap tool. It is primarily aimed to be used on mobile devices. The easiest way to install sqlmapchik on an Android device is to download it from Google Play.

dSploit: dSploit is an Android network analysis and penetration suite which aims to offer to IT security experts/geeks the most complete and advanced professional toolkit to perform network security assessments on a mobile device. Once dSploit is started, you will be able to easily map your network, fingerprint alive host’s operating systems and running services, search for known vulnerabilities, crack logon procedures of many tcp protocols, perform man in the middle attacks such as password sniffing, real time traffic manipulation, etc.

These are the available modules in the app:

zANTI: zANTI is a comprehensive network diagnostics toolkit that enables complex audits and penetration tests at the push of a button. It provides cloud-based reporting that walks you through simple guidelines to ensure network safety.

zANTI offers a comprehensive range of fully customizable scans to reveal everything from authentication, backdoor and brute-force attempts to database, DNS and protocol-specific attacks – including rogue access points.

Orbot: Orbot is a free proxy app that empowers other apps to use the Internet more securely. Orbot uses Tor to encrypt your Internet traffic and then hides it by bouncing through a series of computers around the world. Tor is an open network that helps you defend against a form of network surveillance that threatens personal freedom and privacy, confidential business activities and relationships, and state security known as traffic analysis.

Orweb: Orweb is the most privacy-enhancing web browser on Android for visiting any website, even if it’s normally censored, monitored, or on the hidden web. Orweb is the safest browser on Android. Orweb evades tracking and censorship by bouncing your encrypted traffic several times through computers around the world, instead of connecting you directly like VPNs and proxies. This process takes a little longer, but the strongest privacy and identity protection available is worth the wait.

Due to the rapid increase in the Android Operating System , these tools and applications come quiet in handy while penetration testing . Achieve anonimity and perform web application Assessments on a Palm size Androis Smart Phone, a dream come true for the penetration testers .

Discalimer  : Penetration testing without authorisation is punshable offence in Law . This artical is meant for the educational purposes only .

Maligno can be used very flexibly for communication with Metasploit , and is capable to simulate malware behaviour and traffic patterns .Maligno allows the penetration tester to yield encrypted and encoded payloads and eases the job.

The Maligno architecture is quiet simple : Client and Server  and the communication is either through HTTP or HTTPS .

Maligno Client : The client and the server can configured as per the needs of the penetration tester for specific C & C Communications . The client will connect to Maligno to download the Metasploit encrypted Payload . Once the Payload or the encrypted Shellcode is downloaded , the client will decrypt it and inject into the target machine. The Maligno client already has everything you will be needing for penetration tests using specific payloads . Maligno also comes with a Built in Obfuscater that is capable to obfuscating the generated payload/Shellcode .

Maligno Client supports a variety of Operating systems including Linux , Windows and OSX.

One of the features that ships in with Maligno is “Delayed Payload Execution” which can evade heuristic AV Control .

Maligno Server : The Maligno server relies heavily on the Metasploit framework to do most of the work for it.  Maligno while being used in the penetration testing  relies on Msfvenom to generate the payloads and shellcodes for the different machines participating and also supports Multiple payload and Multiple server capability . Also the metasploit auxiliary module Socks5a proxy is well supported.

During a penetration test , the penetration tester might come across a scenario where the payload needs to be spammed within a specific IP range or network or Single IP . “Last Resort Redirection” is a configuration in Maligno that doesn’t allow it to serve a payload to a target that is out of scope .

Maligno gives the penetration testers the full capability to configure the Maligno server , all you need to do is open and modify the sever_config file . Get a detailed explanation of how to modify this server file in docs/sever_config.explained

The above command will generate the payload/shellcode scripts for each payload configured in server_config.xml file .

To Start the Maligno Server  : ./maligno_srv.py

Now all you need to do is to setup the Metasploit listener . To do so just go to the msfresources folder and start the metasploit listner .

Maligno has been extensively used in the penetration testing for exploiting the machines and in some cases for phishing for convincing the victim to install the enviroments for running the python script .